Oh goodie - more pants! In today's iteration, I've defied the scientific process again, messing with both the pattern and the fabric.

Let's break down the changes!

After some futzing with different elasticated waistband options (none really seemed to work the way I wanted to), I finally gave up and made the entire waistband a single piece of 2" elastic.

While I like the concept and the execution in theory, the reality is that the elastic I found is a little scratchy. If I decide to move forward with this waistband design, I'll need to find an elastic that has a softer backing (but that won't get too sweaty and gross while hiking), and I'll need to figure out how to make a closure for it (I'm thinking snaps, probably?). Nevertheless, it was an interesting idea and I'm glad I tried it out.

For my next prototype, I'll try taking out the elastic entirely, and incorporate some other ideas I have for cinching as needed!

All of my previous prototypes have been made from fabric that I found at my local discount fabric store. While the fabrics are certainly cheaper, the tradeoff is that I don't actually know what the fabric is made out of or where I can get more of it - what's there is what's available, and that's all there is to it. In an effort to be a little more repeatable in my hiking pants experiment, I sought out some fabric from an actual fabric manufacturer, so that if I really love it, I know where to get more of it.

For this prototype, I ended up with a four-way stretch, lightweight, double-weave nylon 66 with DWR (durable water resistance). Nylon 66 is a highly durable fiber (Cordura is also made from the same) and is inherently abrasion resistant, which is extra useful for adventurous scrambling on rocks and it's-just-going-to-happen thigh-rub.

Given the extra stretch of the fabric, I opted to forgo the articulated knee (and you'll see in the gif below that it's wholly unneeded). I did, however, make an attempt at designing chevron-style panels on the front of the leg, because why not?

The fabric is wonderful to wear, but it's also a massive pain to sew. Because it's so stretchy, I need different machines to sew it together than the ones I used. So while it's fantastic fabric, I don't think I'll be using it again!

For my next prototype, I'll be trying out a different fabric - this one only has two-way stretch, which means it only stretches along either the grainline or the cross-grain (aka perpendicular to the grainline). I bet it'll be easier to sew but hopefully it will still have enough stretch to not necessarily need articulated knees 🤞🏽

The elastic waistband still has some weird wrinkles in the back, but I don't find them nearly as offensive as the wrinkles caused by the elasticated waistband from the previous prototype.

The front crotch is pretty terrible, however, so I went ahead and made some modifications to clean it up a bit:

I also changed up the back welt pockets just a tad, to make them look a little farther apart (really, all I did was move the topstitching to be in line with the welt pockets).

For my next prototype, I'll clean up the crotch even more, and maybe even add more pockets (I really like having pockets on the thighs)!

What do you think? Any questions? Ask in the comments or on social media! 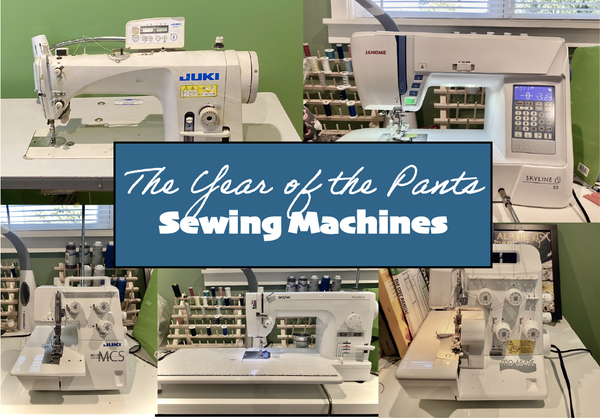 I've gotten some questions on social media about what sewing machines I use. Since I promised an overview of sewing machines in a previous post, here is that post! Sewing, 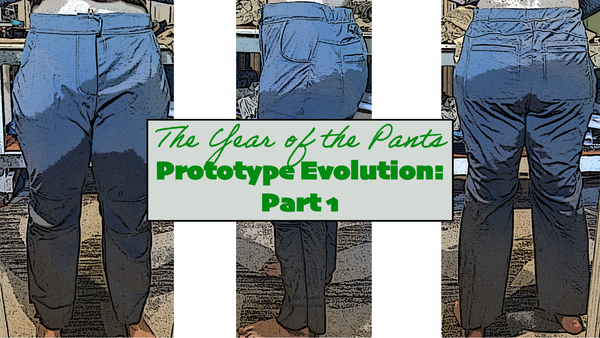 This post is part of a series called 2020: The Year of the Pants. Catch all of the posts via the YOTP tag. In my last post, I shared how